Toyama Maru was a Japanese troop transport in World War II. On 18th June 1944 she left Moji, Japan in Convoy KATA-412, heading for Okinawa. There were troops of the 44th Independent Mixed Brigade aboard, plus a large cargo of petrol, stored in the lower holds in cans.

At 7.30am on 29th June 1944 she was spotted off Taira Jima, Japan, by the US submarine USS Sturgeon, under Lt Cmdr Murphy. Four torpedoes were launched; three hit, one of which exploded the petrol. In the subsequent intense fire and explosions the hull broke in two, and she sank in a minute. Survivors were rescued by the escorts. Some reports say there were over 6,000 troops aboard, with 5,400 lost. Other reports say around 4,000 aboard with 3,674 lost. The latter is more credible, given the size of the ship. Original documents were destroyed by the Japanese at the end of the war, so the true figures will never be known. However, it is accepted as one of the ten worst maritime disasters in history. 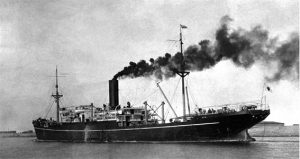 Toyama Maru was laid down on 4th August 1913 at the Mitsubishi Dockyard, for NYK Line. Completed on 3rd June 1915, she was 445 feet long, 7,089grt. In 1935 she was sold to Nanyo Kaiun, and some 18 months later sold to Ono Shoji Gomel. On 29th January 1941 she was requisitioned by the Japanese Imperial Army and assigned Army number 782. After being involved in several Pacific actions including the Philippines and Singapore, she was used to transport prisoners of war in the most appalling conditions. She was then transferred to transport Japanese troops to various theatres of war, until her final convoy.

recording the history of famous liners in beautiful hardback books

Author and historian, Les Streater has written and published over thirty books on various aspects of shipping, as well as editing and producing a number of magazines on shipping and aviation.